This is important: to get to know people, listen, expand the circle of ideas. The world is
crisscrossed by roads that come closer together and move apart, but the important thing is that they lead towards the Good. 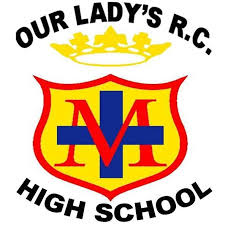 Our Lady’s RC High School is a Catholic secondary school in the trusteeship of the Diocese of Salford.  It is maintained by Manchester Local Education Authority and is a voluntary aided school.  The governing body is the admissions authority and is responsible for taking all decisions on applications for admissions.  The co-ordination of admissions arrangements is undertaken by the local authority.

For the school year commencing September 2021, the governing body has determined that the number of children to be admitted to year 7 will be 180.

The school’s role is to participate in the mission of the Catholic Church by providing a curriculum, including Catholic religious education and worship, which will help children to grow in their understanding of the Good News and in the practice of their faith.  The school will help the children develop fully as human beings and prepare them to undertake their responsibilities as Catholics in society.  The school requires all parents applying for a place here to understand and respect this ethos and its importance to the school community.  This does not affect the rights of parents who are not of the Catholic faith to apply for a place here.

Admissions to the school will be determined by the governing body.  Parents must complete a local authority preference form or apply online via the website:

If there are fewer than 180 applications, all applicants will be offered places.  If there are more applications than the number of places available, the following oversubscription criteria will be applied:

2. Baptised Catholic children resident in the parishes of:

3. Baptised Catholic children who have a sibling in the school at the time of admission.

5. Other children who have a sibling in the school at the time of admission.

8. All other children seeking a Catholic education.

If it is not possible to offer places for all applications within any criterion above, priority will be given to those children living nearest the school. Distance is to be measured in a straight line from the centre point of the child’s permanent home address to the centre point of the school as defined by the Ordnance Survey, the national mapping agency, using the local authority’s computerised measuring system, with those living closer to the school receiving the higher priority. In the event of distances being the same for 2 or more applicants, places will be allocated by method 1-8 above.

a. All applications will be considered at the same time and after the closing date for admissions which is 1st November 2021 at 5pm for applications made through Manchester City Council. Nb. The deadline is different for other councils such as Rochdale and Salford.

Those who have difficulty obtaining written evidence of baptism for a good reason, may still be considered as baptised Catholics but only after they have been referred to the parish priest who, after consulting with the Diocese of Salford will decide how the question of baptism is to be resolved and how written evidence is to be produced in accordance with the law of the Church.

d. Home address is considered to be the address where the child normally lives.  Where care is split and a child moves between two addresses, the household in receipt of the child benefit would normally be the address used but the admission authority body reserves the right to request other evidence as fit the individual circumstance. Applicants should not state the address of another relative or person who has daily care of the child.

f. The admission of a non-Catholic child in a year when there are vacancies remaining after the demand from Catholics is met does not guarantee a place for a sibling in a year where the Catholic demand is greater.

g. A waiting list for children who have not been offered a place will be kept and will be ranked according to the admission criteria.  The waiting list does not consider the date the application was received or the length of time a child's name has been on the waiting list. This means that a child's position on the list may change if another applicant is refused a place and their child has higher priority in the admissions criteria.

h. For ‘in year’ applications received outside the normal admissions round, if places are available they will be offered to those who apply.  If there are places available but more applicants than places then the published oversubscription criteria will be applied. To apply for a place “in year” you can do so through the local authority https://secure.manchester.gov.uk/info/500322/secondary_school_admissions/7268/apply_for_a_secondary_school_place_for_2016/4.  The local authority will let you know the outcome of your application within 15 days of receipt of the application.

i. If an application for admission has been turned down by the Governing Board, parents may appeal to an Independent Appeals Panel.  Parents must be allowed at least twenty school days from the date of notification that their application was unsuccessful to submit that appeal.  Parents must give reasons for appealing in writing and the decision of the Appeals Panel is binding on the Governors. Information about appeals can be found on the local authority’s website . https://secure.manchester.gov.uk/info/500322/secondary_school_admissions/7268/apply_for_a_secondary_school_place/5

j. The Governing Body reserve the right to withdraw the offer of a school place where false evidence is received in relation to the application.

There is guidance on what to do if you wish to appeal the pace your child has been offered at the links below.

You can find Admissions Policies on our 'Policies' page by clicking the link below.

Unfortunately not the ones with chocolate chips.

Some cookies are necessary in order to make this website function correctly. These are set by default and whilst you can block or delete them by changing your browser settings, some functionality such as being able to log in to the website will not work if you do this. The necessary cookies set on this website are as follows:

Cookies that are not necessary to make the website work, but which enable additional functionality, can also be set. By default these cookies are disabled, but you can choose to enable them below: